By Our Representative
An Ahmedabad declaration on Right to Education (RTE) has claimed that less than 10 per cent of the schools in India are actually implementing the RTE Act in its letter and spirit despite the fact that the Act came into force more than six years ago.
Worse, the declaration, which was adopted at the end of a one-day workshop organized by Shala Mitra Sangh, a Gujarat-based NGO attached with the All-India RTE Forum, “Government authorities have failed to come up with any norms and time-frame for implementing RTE”.
Asserting that, under the RTE Act, all schools should have “fulfilled the minimum requirements” – which include number of class rooms, teacher-student ratio, necessary sanitary facilities, teaching aids, etc. – by March 31, 2015, the declaration says, yet this eludes most schools, and government authorities are blissfully indifferent.
Referring to the well-known Kothari Commission, set up by the Government of India way back in mid-1960s to examine all aspects of educational sector in India to evolve a general pattern of educational policy, the declaration says, it had insisted on providing six per cent of the Gross Domestic Product (GDP) as budgetary allocation for the sector.
Yet, regrets the declaration, even five decades later, the Government of India’s budget for education hovers around four per cent of the GDP. What is regrettable, it says, is that, of this, only 65 per cent of the allocation is “collected” in the form of educational cess — which means the authorities are “not serious fund education.” 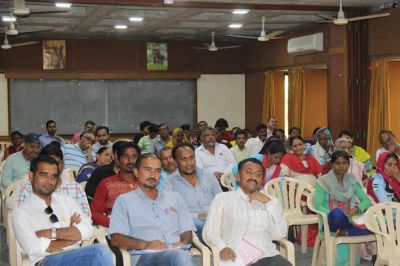 Taking exception to the RTE Act only covering children between six and 14, the declaration insists, it should amendeed to include “pre-primary and secondary level education, as recommended by the United Nations’ (UN’s) Sustainable Development Goals. “As education is in the concurrent list, it is the joint duty of state and Central governments to implement RTE”, it adds.
The declaration says, as education fails to get priority in the overall bureaucratic mindset in most of Indian states, children of the the weaker sections of the population, especially especially those belonging to the Dalit, tribal, other backward class and minority communities, suffer.
Demanding that all private schools must ensure 25 per cent of seats are reserved for the poorer sections, as required by the RTE Act, the declaration wants the government to cancel recognition of those schools which fail to do it. In fact, it adds, the government should implement the principle of equal schooling for all.
Taking part in the workshop, which took place at the Centre for Environment Education (CEE), Ahmedabad, an RTE Forum representative, Mitrarajnan, said, because of the failure to implement the RTE Act, even now, eight crore children remain out of school, which is extremely regretful.
“What is worse”, he said, is that “under the present regime, private schools are being given importance, while the government schools, where 90 per cent of the children study, are becoming weaker with every passing day.”
Speaking on the occasion, social activist Mahesh Pandya, director, Paryavaran Mitra, said that roadmap for implementing the RTE Act should be discussed threadbare in gram sabhas and educationist Jharna Pathak wanted “coordinated effort” by RTE activists and government authorities to ensure implementation of RTE.
Launching Shala Mitra Sangh’s new website, shalamitra.com, its convener Mujahid Nafees insisted on the need for providing quality education for all, even as calling upon participants to make it interactive.